Kerry Panaggio is a fashion stylist and Associate Lecturer at The London College of Fashion. She began her freelance career as the London assistant for American Vogue. In this time she assisted iconic editors Hamish Bowles and Phyllis Posnick and became the first assistant to Caroline Sieber – a Chanel Ambassador, who styled Emma Watson for the Harry Potter press tour, alongside shoots for American and British Vogue.

Over the next five years, Kerry assisted many of the world’s top stylists such as Karl Templer, Jane How and Nancy Rohde and worked on shoots for some of the industries most noted publications such as Interview, V Magazine, Lula and Italian, French and American Vogue with seminal photographers including Bruce Weber, Mert and Marcus, Nick Knight, David Simms, Willy Vanderperre, Solve Sundsbo and David Baliey. In this time, Kerry completed a Masters Degree in Fashion History at the London College of Fashion.

In 2012 Kerry took up the position of first assistant and studio manager for Katy England, overseeing and contributing to shoots from conception through to production. Highlights of this time include; working on the Givenchy shows in Paris, the Jil Sander shows in Milan and shooting with Kate Moss for many editorial and commercial shoots, including the campaign images for Kate Moss for Topshop collection. In addition, Kerry sourced garments from around the globe for a special Alexander McQueen archive shoot, which featured in Another Magazine and coincided with the V&A’s Savage Beauty Exhibition.

Since January 2015 Kerry has worked to forge her career in Fashion Styling securing contacts for fashion brands such as People Tree, Toast, John Lewis, Caramel and Chinti & Parker, which was featured by The Guardian and British Vogue, alongside commercial campaigns for companies such as Facebook, Google, British Airways, Mercedes Benz, Mini, Sainsburys, Waitrose, BT, Aviva, Natwest, Lloyds & HSBC.

Kerry is as an Associate Lecturer at London College of Fashion, where she has been delivering the her course ‘Fashion Media Styling: Commercial’ to students for the past five years. She and has also written and taught courses for Hungkuang University in Taiwan, JD Institute who have campuses throughout India and is currently working with Irthi Contemporary Craft Council’s programme ‘Azyame’ to deliver a bespoke theory and practical course supporting female designers in Sharjah, UAE. Kerry has recently signed with Global Creative Management, a new teaching and consultancy platform through which she is able to deliver her courses online and also one to one tuition, for more information please follow the link below. 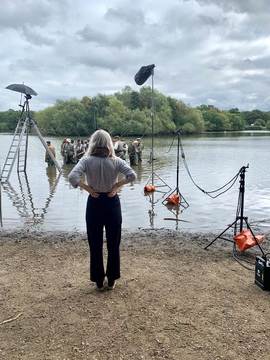